a tea and a puerh tea from Thailand? 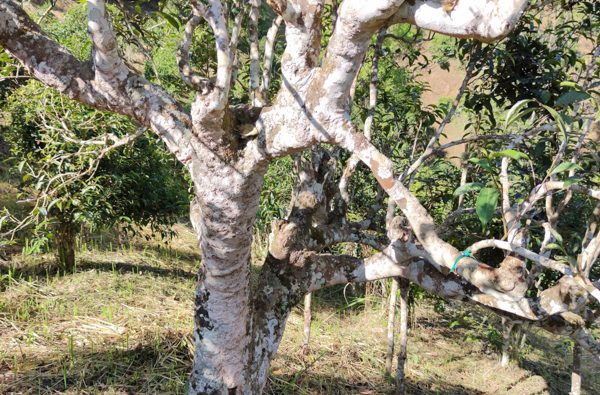 The idea of sourcing tea from Thailand laid in my mind for a long time. About 20 years ago I tasted some very good oolong teas from Thailand. At that time living in Prague, starting my tea journey, I was trying all sorts of teas.

Later about 10 years later I was curious about these teas again and I drunk some and was disappointed not finding the quality I was hoping for. The same idea of checking more of Thai teas came to me about 2 years ago. I checked/tried some offered in the western ‘market’ and I was really put down by the quality, not exactly the taste but rather agro-chemical contamination. I have not have tested in them by lab test but rather relied on my bodily senses that are getting more and more sensitive.

Why Thailand? This country has a strong pull on me, I go there back again and again as my whole life feel for Buddhism. I just wanted to use my trips also finding some good tea.

I read about a Chinesse comunity of people that fled China in the 50s of last century. They settled in the mountains of North Thailand. Seeing later the very old tea trees in those mountains brought me to an idea that those are a legacy of the long time ago settlers, probably thousands years back. One part of Thai people originates from China.

I found a note of an organic tea growers in one the many chinesse villages not far from Chiang Rai so I made a contact with them and before my stay in a buddhist monastery I paid them a visit.

The old man, the grand father is/was a kind of professor teaching something in connection with tea thoughout Asia. His son got also the affection for tea and most importanly understood the value of ecologically growing old tea trees.

The most important thing that got me was the purity of their tea. I know it instantly when I don’t have any negative feelings after drinking such, even after a few sips your body responds. Yesterday I was retasting these teas when I stock them and even drinking three kinds would not made unwell. Neither nervous, restless or with stomach pain.

The family has three places in the surrounding mountains where they have their tea trees, actually four, but the last one is for oolong tea. Their honesty goes that  far that the guy says oolong tea is hard to grow without chemicals but his aim to achieve the organic way  in a few years. This was also the reason his oolong bushes were so small compared to others in the surrounding. He was not giving them ‘chemical coctails’ in the last years.

The place, the most I liked was a steep mountain, rather a tiny valley with a stream flowing at the bottom, with a steep slope that was almost impossible to climb and the upper parts were old tea trees sticking to the mountain. Downhill old baracks as I was told was an old tea factory from the last century. The tea produced here was and is still partly produced for chinesse market. A puerh tea is unknown for Thai people and just a few know it.

So this is a rather short story of the longer one and get back to the tea as one thing is a story the other is the actual experience of the tea. My own experience with these teas are as mentioned their purity and I would say a rather traditional way of producing puerh tea. It is made to age and taste well it its later years. Each stage of such tea has its own fans. These teas can be brewed/steeped endlessly as they constantly produce a tasty puerh liquid.

I put into ‘introductory’ selection a tea from steep slope mountain that is callled Chafang Pang San Zhou. Actually the tea garden’s name is Pang San Zhou. I find it very distinctive, natural and simply tasty.

The second tea is called Chafang Danzhu and it is a selection of 10 oldest tea trees that age is around 500 years and older. I rarely put/write about the age of tea trees but I made an exception here. It is perfect chance to have a comparison once the very old, a few tea trees are selected and made into a tea.

The third tea is 2016 maocha found by this family. This is a batch ordered by someone and never sold/taken. When I first tasted I knew this is it, this is how these tea will taste and this is the right direction of ageing process. I simply regard it taste profile having all the ‘old time’ sheng puerh characteristics. It was the first sample I completely finished.

Once you understand fully why is the sheng puerh a raw puerh then you won’t have doubts why sheng should be aged for some time, at least. This ofcourse needs time, it took almost 10 years. Before that I knew this fact but only knew not comprehended fully.

My story with my wine maker friends tells it clearly. He makes unusual wines using traditional methods to make wine as several hundreds years ago. He grows very old varieties of wine.

Later I took my wine maker friend to RAW Wine festival in Berlin at that time. His wines made great impression on people coming to taste them and they left many of the old wine makers (from France, Spain, Portugal) a bit startled as they were not sure how those wines were made.

I believe that if we would focus on the feelings a certain tea gives us then we would not miss genuine good teas.  Flavours, taste might decive us but feelings come from the heart and that won’t cheat us.