leave you endlessly catching the rabbit, the right words to describe, to bring those sense feeling into words, the rabbit is too quick and too snappy to be caught

The Naka mountain is a hill with a few old tea trees, not so few but still compared to other mountains its yield of old tea leaves is pretty low.

The 2016 ‘version’ caught my attention this morning, it’s been some time I had this ‘vintage’.

Preparing the charcoal in 2 rounds, the first was unsuccessful as the humidity is pretty high these days so the charcoal needed more direct fire on a kitchen gas stove. Still this gives me more time to setup all the things and myself as well. 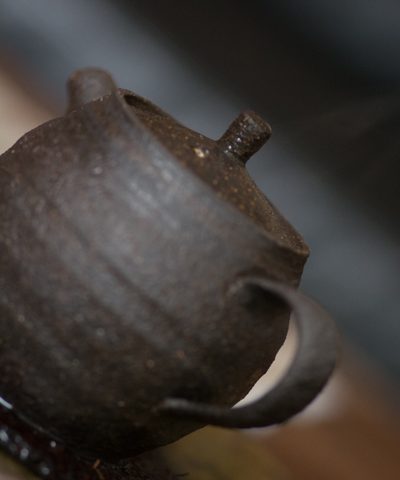 You taste the first brew and there is pretty nothing interesting, some ageing is going around and the mouth gets the first few mouth wash, the hot water will clean the mouth cavity the tongue the teeth and have it ready for the full ‘shots’ of next brews.

The second brew bring nuts, richer taste profile, slowly opening up a fuller scale of tastes that are not that crispy as they used to be when the ‘buddy’ was younger and had more vigour. Maturing is in place and this mid phase, lets call this state so, when a sheng is neither young neither fully matured but on a way to be an aged pu-erh.

The third brew brings more taste palette with ripe ripe fruits, earthiness, woody and wathever you call this complex indescribable gushu knocking tasty taste with its ‘energy’ that will fully penetrate you and have you feel big, strong and floating with the present moment.

Later brews have you savouring all those ‘fancy’ tastes in your mouth and leave you endlessly catching the rabbit, the right words to describe, to bring those sense feeling into words, the rabbit is too quick and too snappy to be caught.

What about have now the fresh 2018 Naka, where it is? it’s sold out, finding a few grams spared for myself. All those fresh notes of a ‘baby’ sheng are here, floating in the air, first was not sure if I feel something else but no, its the ’18 Naka there.